TV can be educational, and not just the PBS channel and Sesame Street, the how-to shows like Painting with Bob Ross, and the evening news on warnings regarding arsenic in apple juice or fungicide in the orange juice (watch your laptop if you are spitting it out now!).  On The Nanny, Brighton Sheffield learns loyalty from watching Gilligan’s Island;  on the TV dating shows you might learn what not to do…and even some tips on finding love and how to play the ‘dating game’ … like it’s not a game.

Reality TV may seem more fake than real at times, but it doesn’t just offer a manual on different ways of swapping spit and ideas on what to do/where to go on your dates, especially if money’s no object.  Season 16 of “The Bachelor”, ABC’s long – and more expensive – version of  The Love Connection, is coming to a close next week with the two-hour season finale, as viewers will learn who the Bachelor Ben Flajnik chooses to marry and perhaps proposes to – quirky Courtney Robertson (model) or nice Lindzi Cox (business development manager) - both 28 and from Santa Monuica, CA, but almost like total opposites.  Last night ABC aired the “The Bachelor: The Women Tell All”.  What a spoiler when the surprise guest Courtney was flustered after saying, “I’m sorry for hurting Ben. I cared for him…and I still do.” - the “still do” added after an awkward pause and exchanging a glance with the evidently uncomfortable host, Chris Harrison, who then quickly jumps in to move the conversation along.  And then later in the next segment, Ben says, “This whole watching the show thing is difficult. I’m realizing the way this all plays out. I didn’t get to see it, obviously.”  The references being to the behind-the-scenes footage with Courtney and the quarrels with the other ladies on the show who felt she was just treating the experience like a game to win, playing all her cards, bluffing at times.  So what to get from all this “real-life” drama, besides that ABC likes to change it up for ratings and it looks like Ben chose and proposed to Courtney … besides the world tour of tourist attractions … the bigger picture on love and finding love…

1) First impressions can get you in the door, like a job interview it’s important.  But if you’re not the right person, you’re not going to keep the job even if you land the job at first.

2) Like in school, participation can be very important.  The teacher knows the shy A student knows the answer but not until they already have graded papers or already heard about the student from previous teachers.  Better you tell and show the other person the nice and great person you are, than them getting the third hand account, or even not getting to know the real you.

4) How you treat others matters.  Not just how you treat the one you want to impress.  Nothing says that clearer on this season’s “The Bachelor” than Courtney’s experience.  You know that saying, that if you want to know how your husband will treat you in life, look at how he treats his mom.  How attractive is a guy that treats his family and friends with respect and love.  Cute inside and out – really if you are not cute inside, the outside does not look cute anymore.

5)  What you believe in, your background, is a part of you.  Opposites may attract, but maybe not.

7) When you find your match it feels easy, you feel comfortable around them, you feel like you can be and you are yourself, all of yourself.  But it doesn’t mean necessarily that you don’t have to work on your relationship at all.

8) Is it bad to wear your heart on your sleeve?  If you think someone is “the one” after the first date, the one you want to marry, that you love them…should you tell them right then … like Ted telling Robin he loves her after his first date on “How I met your Mother”.  … Follow your instinct.  And refer to #6.   Some people would probably like it if they felt the same way.  Or it might scare some people away.

9) Don’t play the dating game like it’s a game.  How did it get called that?  Maybe because sometimes it feels like a game.  Be honest.  No turn on for The Bachelor’s Ben watching Courtney looking like she’s “playing the dating game” or looking like she was “playing” Ben and perhaps not in it for real love, but just to “win the game”.  Similarly, The Bachelor’s Emily Maynard was uneasy watching all the episodes of her then fiance Brad Womack making out with all of the other women when the show aired. The next Bachelorette – Emily Maynard.

10) Jerry Seinfeld gave some good advice (on another show) – don’t be an accountant when in a relationship.  Don’t keep count of who called last – or how many times he/she called and how many times you called.  Then again, if you’re doing everything, he/she might just not be that into you.  If you’re on a show like “The Bachelor”, these signs can be hard to read if the guy is kissing you and showing his affection to you.  You might be in for a surprise at the next rose ceremony.

The two-hour season finale of The Bachelor airs next Monday, March 12th, at 8/7c on ABC, followed by a one-hour “After the Rose” special.  Do you think Ben accomplished his goal of finding true love? 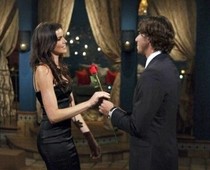