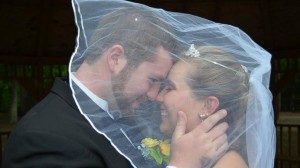 Childhood sweethearts, Justice and Jeremy Stamper, met at 10 and 11 years old at their Sunday school church.  They had some years of separation and then connected again in high school:

“She asked a friend for my number and we hit it off ever since,” Stamper said. “I guess you could say it was a childhood crush. I thought she was the cutest thing ever. We dated for 11 months and then got engaged.”

After 2 years of being engaged, they got married on August 1, 2014, with 70 friends and family members:

“It was a country sunflower theme,” Stamper recalled. “It was absolutely perfect.”

Weeks later, just 2 days before they were planning on moving into their new apartment, Justice got in a car crash, and lost her short term memory:

“She called, but all I could hear was her crying her eyes out,” Stamper recalled. “I don’t remember anything after that. I got in my truck and flew over as fast as I could to see if she was OK.”

“When she said she had memory loss, the doctors said it could come back and it might not,” he said. “Signing our lease, renting our apartment, the planning, all that stuff she has no recollection of.

“She looked at the [wedding] pictures and she saw the video, but she said it drew a blank. It would only upset her.”

Jeremy had the solution:

While she said she’s excited, Justice recalled that she was completely shocked when her husband told her she would be a bride once again.

“He never cries, but since the accident he’s become so sensitive,” she said. “He’s just a big, old, gentle, giant.

“I’m absolutely looking forward to seeing his face when I come down the aisle,” Justice added, with a laugh. “That is the moment I want to see.”
(via ABC News) 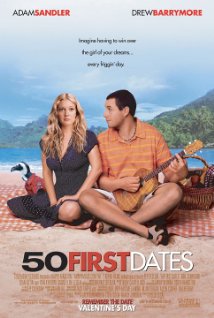 This entry was posted in Love and tagged 50 first dates, love, wedding. Bookmark the permalink.