The CBS hit comedy “How I Met Your Mother” turned the tables on Monday night’s 200th episode, showing the parallel story of the mother this time, with Ted Mosby & friends so close by.  So many times that the hopeful romantic Ted and – we still don’t know her name! – almost “clicked” over these 8 years through friends or close encounters.  Let’s call her Teddy for now…  It’s a 30 minute episode with theme song “It’s a Small World After All”.  And side note: this is how and why Friends Match Me works – you probably haven’t met all of the single friends, acquaintances, and extended family of your friends, acquaintances, and extended family (a.k.a. Facebook friends), but who knows, maybe there’s a match there.  You already have something in common and get that nice familiar feeling, a sort of reassurance – you know like how you have just met someone and then find out you know some of the same people – that nice feeling.  Also somehow it seems like a lot of people who fall in love with each other already knew some of the same people before they met, whether they knew it at the time or not.  So, why not you?!

Now whether you believe that tv (art) imitates life, vice versa, or love to love love, here are the HIMYM close encounters love story, “How Your Mother Met Me”…  First there was MacLaren’s Pub on the West Side where a red head mistakenly went to instead of the one that is also apparently on the East side.  Ted and the gang were right there too, and it was actually the first night he met Robin, and the night Lily and Marshall got engaged.  The red head rushes to the West side, where Teddy was celebrating her 21st birthday party.   Same place, but different location.  Sad night for Teddy who loses her love Max.  St. Patrick’s Day 2 years later Teddy goes with her friend Kelly to the same club that Barney convinced Ted to go to.  Both Teddy and Ted kind of in a dating funk.  Kelly told her you don’t know who you’ll bump into and while she didn’t bump into Ted – that would be a much shorter ‘How I Met Your Mother’ story – she did bump into her old friend Mitch, who Ted and the gang know as The Naked Man.  Kelly was part of the 2 out of 3 in his get-sex-because-you’re-already-naked strategy, sharing this with Robin – actually sharing it with the same guy too.  Small world, huh?!

What Mitch gave to Teddy was some renewed umph to go after her dreams, namely to end poverty.  Teddy then decided to go back to school and get her degree in Economics, where she DOES actually meet Ted in class.  He mistakenly thought it was architecture class, states it in the class that it’s architecture class, which makes her fly out of the class thinking she was in the wrong class.  Then when outside, she realizes that she was in the right class, at which point Ted has realized that he was in the wrong class and in this whirlwind they actually physically bump into each other outside.  Rush, rush, rush.  While Teddy did laugh at his joke in class, and seemingly was the only one to think it was actually funny (I would have laughed too), Ted ends up dating Teddy’s roommate who she met on that first day of class, Cindy.  Again, ya, totally small world, right?! No sparks between Cindy and Ted though as he unintentionally picks out and loves all of the things in their apartment that belongs to Teddy, but still doesn’t get a chance to meet Teddy.  He has been using Teddy’s yellow umbrella all this time though, from when she left it at the club on St. Patrick’s day and he picked it up when it started raining.  Teddy is surprised to find it in her aparment now, left by Ted, and also even more surprised to find out that night of Cindy’s breakup that she has been dating the “architecture professor” from that first day of class – intrigued look on Teddy’s face, especially after Cindy tells her that Ted likes her without even having met her.  Kiss between Cindy and Teddy and Cindy realizes she might be gay.

Then there is also the time that Teddy goes to do a gig at MacLaren’s – Ted’s MacLaren’s – and meets a nice guy named Louis who helps her haul her heavy band equipment into their van, after meanie band member Darren, who she invited into her band Superfreakonomics, just laughed at her while flirting with a string of girls.   There’s no Ted there – he would have for sure helped her carry her stuff to the car.  But his being a part of this pub is reverberated when Louis says he thought the place was called “Puzzles” – the name that Ted and Barney gave it during their one night in charge.  And also reverberated on Darren’s face, fast forward to last time’s episode where Ted punches him for bumping into him and making him drop the third bottle of $600 Glen McKenna scotch during Robin and Barney’s wedding weekend.  Interestingly, Teddy then asks the bartender to give the “groom’s best man” a double of the finest scotch  which turns out to be the very drink that Ted and the gang have been raving about throughout this wedding weekend.  And he notices.  Anybody else thinking of that saying, ‘The way to a guy’s heart is through his stomach’?!

Back to this episode, Teddy’s breakup with her longtime boyfriend Louis ends with her not accepting his marriage proposal even after asking for and feeling Max’s blessing to move on through a gust of wind, because Louis is not the one.   She leaves Louis’s beach house and books a room at the Farhampton Inn, the same hotel as Robin and Barney’s wedding…the room right next to Ted. 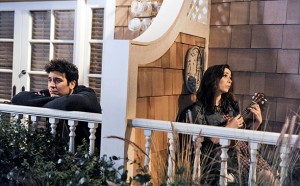 Playing into his heart with the mini ukulele that her Max gave her for her 21st birthday, singing “La Vie En Rose“, translated as “Life in Rosy Hues” or “Life Through Rose-Colored Glasses”, or literally “Life in Pink”.  Love at first sight in a different sense.

This episode of HIMYM had the biggest demographics since last February (the day after the Super Bowl) and its largest audience since 2011 – 10.7 million viewers and a 3.8 rating among adults 18-49.  It wasn’t a secret that we were going to get the parallel story of “How I Met Your Mother”, and apparently there seems to be a lot of hopeless – or as I like to call it – hopeful romantics.  Awww!!

This entry was posted in Love and tagged how i met your mother, how your mother met me, love, love story, wedding. Bookmark the permalink.