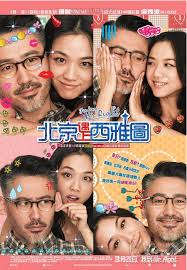 The romantic comedy “Finding Mr Right” is the Chinese version to the popular American movie “Sleepless in Seattle” with Meg Ryan and Tom Hanks.   It only got 2 stars from the Seattle Times, but that hasn’t stopped Chinese romantics from booking trips to Seattle since the movie debuted in China last March.

“The phones started ringing and it hasn’t stopped. We have been amazed at the response,” said Janet Christopher, vice president of tourism for Visit Seattle, told the ABC News station KOMO in Seattle. “This is bigger than ‘Sleepless in Seattle.'”
…
“What we have seen is a number of people want to come over and have a second wedding or a honeymoon-type vacation — couples that are getting married in China but they want to come to Seattle and recreate a wedding experience because of this movie,” Christopher told KOMO.
(via ABC News)

What is the movie about?  It’s not the same romantic setting as “Sleepless in Seattle”, but apparently has the same nice, romantic ending:

The movie is about Jiajia, a woman who travels from China’s mainland to Seattle to have her married boyfriend’s baby, win his love and spend his money. Determined to have the baby in the United States, the movie’s trailer shows her telling a customs officer she loves Nora Ephron’s “Sleepless in Seattle” (“I love that movie,” she says, closing her eyes and shaking her fists. “I love it!”).

Of course, everything doesn’t work out as planned. The boyfriend doesn’t leave his wife, and his money runs out. But the protagonist winds up falling for her driver, Frank.

Frank, the movie’s Mr. Right, turns out to be a former doctor who moved to Seattle for his daughter because his ex-wife’s job moved them there. And — spoiler alert — Frank and Jiajia somehow wind up at the Empire State Building in Manhattan at the end, just like the characters of “Sleepless in Seattle.”
(via ABC News)

This story was featured on ABC News with Diane Sawyer today.  The Seattle men interviewed were very happy to hear of the incoming single women travelers looking for love.  And the Chinese women interviewed said that they think Seattle is a good place to find your true love.  Maybe the next news story will be about a match made?!

Anyone single and looking for your Mr. or Miss Right – sign up for the 100% free dating app Friends Match Me – www.friendsmatchme.com !! To get started, just click on the top right “Connect with Facebook” button there.